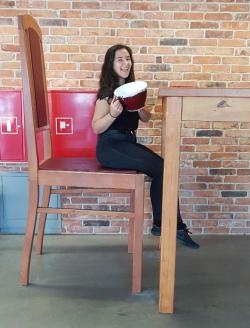 My name is Shany Azoulay, and this summer, I am traveling around Eastern Europe for the Dutch Jewish Humanitarian Fund (JHF). On my trip, I will visit projects for the JHF and meet people who can tell me about the Jewish communities in their cities.

While I was in Belgrade, I have spent most of my time with the organization Haver Serbia. Haver Serbia is a Jewish organization that educates people about Judaism, to Jews and non-Jews. Through education, they try to reach all the different kind of Jewish communities in Serbia.

Haver Serbia organizes a wide range of events for different ages. When I was there I joined the Midrasha, an event for students and elderly. They organize it in cooperation with the Jewish community of Belgrade and the synagogue of Belgrade. The events are (almost) every month and are two days in a row. The topic of the Midrasha is always related to Judaism and they try to approach the topics each time from a different perspective. The aim of the course is not only to teach and learn people about Judaism but also to reach the Jewish society, in order to create a coherent society.

The first night I was in Belgrade, I was part of a Midrasha about Kashrut. Approximately thirty people were sitting in front of a rabbi in the Synagogue of Belgrade who explained about when products are Kosher. A lot of the people didn’t know much about it and were listening attentively. They asked questions and wanted to know where they can buy kosher products.

After the gathering, everyone moved to the attic of the synagogue, where they could chill and laugh with each other. I talked a lot with the people about the Jewish community in Belgrade. They told me that the community is small but close. They all know each other well (Everyone knows everyone). A lot of them were first chanichim (children) in the community where they would go to weekly gatherings for their own age groups and they learned about Judaism. While they grew older, they turned into madrichim (mentors) and counselors for the activities.

On my second night, Haver Serbia organized a ‘challah-bake Midrasha’. It was a lot of fun to make them and see the whole process on how to bake them. They even made some special ones with apple and raisins in them. Of course, they tasted amazingly delicious. It couldn’t go wrong with so many Jews together.

The Jewish community of Belgrade

Nobody knows precisely how many Jews live in Belgrade. It is hard to tell, according to Sonja Vilićić - the director of Haver Serbia Organization - because most of the people don’t want to tell other people that they are Jewish or they just don’t know how to practice it. “A lot of people here focus mostly on the cultural aspect of Judaism. People celebrate the holidays and go to the social events that the communities organize together,” says Sonja.

Belgrade has between 2000 and 2500 Jewish inhabitants, according to Sonja, which makes it the most significant community in Serbia. “It’s a small community and it’s a challenge, because of the number of people. Especially because we don’t expect to grow fast in the future. I guess we will not grow, but we will still focus on our Jewish identity and cherish our community,” tells Sonja.

There are a couple of reasons for the fact that the community is so small. The first reason is the Second world war: more than 83 percent of the Jews in Belgrade died during the Holocaust.

The second reason is that Serbia had a period of (independency) wars during the 90’s and a lot of Jews emigrated to Israel or the United States. They never returned after the wars.

The third reason is that a lot of Jews simply don’t want to say that they are Jewish because of the historical reasons.

Sonja: “The last time we had to describe ourselves to the state of Serbia, only 250 Jews actually signed that they were Jewish, out of 3,000 people. The community is even smaller in the eyes of the government because of that. They don’t even see us as a minority now, but as a ‘group of people’."

The Jewish community in the Baltic States

“Grown up and reunited”

During my time in Estonia and Latvia, I went to a seminar that was held by the Baltic Jewish network. This is an organization that is organizing networking events for young adults that are involved with the Jewish communities in the Baltic states: Latvia, Lithuania, and Estonia. Besides these countries, they also try to reach Russian speaking communities in the rest of Europe. The main idea of the organization is to build a network between Jewish young professionals from different countries. Not only to find new friends and people to share their ideas with, but also to find new business partners. “All of us know each other from childhood. Being chanichim (children), becoming madrichim (mentors). Now we are all grown up and we are reunited here,” tells one of the founders of the organization: Ilja Haggins.

“All of us know each other from childhood. Being chanichim (children), becoming madrichim (mentors). Now we are all grown up and we are reunited here,” tells one of the founders of the organization: Ilja Haggins.

The organization is existing for five years and throws every year two events: one big seminar with many lectures that is lasting for three days and one small seminar that lasts for two days. I was participating in the last one. The second seminar is used by the board to share future ideas about the seminars with the participants. They also call it the ‘party event’, because it is a more ‘laid back event’. If you want to read about all my experiences during the event, read my diary.

There were a few things that I thought that were remarkable about this organization. One of them is of course that almost all the people know each other from a when they were children, while they are all from different countries. They speak all perfectly Russian, so there is no language barrier. Most of the people came already for a long time to the events, there were no people that were there for the first time.

Haggins: “The Jewish communities in the Baltic states are close, even in the meaning of intermarriages. We have a lot of people that meet during Jewish events and they move to another country for each other." One of the other things that were remarkable to me, was that some of the participants of the seminar told me about that they ‘hide’ that they are Jewish outside of the events. They don’t tell other people that they are Jewish, nor celebrate Shabbat or other holidays. For them, the event is the most Jewish thing that they do.

The Jewish community in the Baltic states

Riga (11,000) is the most important center of Jewish life in the Baltic States. There are several smaller communities, notably in Daugavpils, Liepaja, Jekabpilsand Jelgava. In Tartu itself, where the seminar was held, is barely a Jewish community. They don’t have a synagogue and there is not an active Jewish organization. Haggins: “It’s comfortable to live a Jewish life in the cities here now. We don’t have any kosher restaurants or shops, but maybe they will appear in the future. I don’t think that that is the only thing that is making your live Jewish.”

“For sure there are anti-Semitism issues, but these are small. There is some anti-Semitism here, but not like in western Europe. It is not a problem to walk around with a kippah. I studied in a Jewish school. At my university, everyone knew I was Jewish. I have never met anti-Semitism in the street during my whole life, never. I have never been blamed or bullied for being Jewish,” tells Haggins.