During more than three weeks Tessa Leviton and Elias Poolman visited projects in Central and East European countries. The emphasis was on summer camps (machanot). Their experiences in Bulgaria, Russia, Ukraine and Belarus are summarized below:

At Sofia Airport we were picked up by Gal Katsir in his Jeep, he took us to the summer camp of Hashomer Hatzair. He is the Shaliach, which means that he is the anchor for everyone in the youth movement.

The best way of camping is being outside" said Gal full of pride. Hashomer Hatzair is convinced that the children in the camp are more involved doing everything themselves and by learning real skills so that they can survive in nature. He indicates that the chanichim (children at the summer camp) don’t do everything right away, for example, it happens that they do not know how to put their tent in a good position, and as a consequence get wet in the night because of the rain.

Hashomer Hatzair consists of three pillars: Judaism, Zionism and Socialism. The aim of the youth movement is to create independence and activism among young people. What is important for them is a secular humanistic Judaism. They believe that mankind is central to life and G’d does not exist. Hashomer Hatzair has branches in several countries, including Bulgaria.Furthermore, they organize weekly activities such as film-, discussion events. The winter camp takes place in a hotel and summer camp in the open air.

Last night, due to a storm, every one of the camp stayed in the Moadon (clubhouse) in the centre of Sofia. This morning they returned to the campsite. During our tour, we saw chanichim put nets between tree stumps. We were told that the chanichim made their own places to sleep at the summer camp, with tree stumps, ropes and a plastic cover. The participants of the summer camp immediately made us feel at home and wanted to explain everything. For example, we were taught by a girl how to make the places to sleep and we could help. 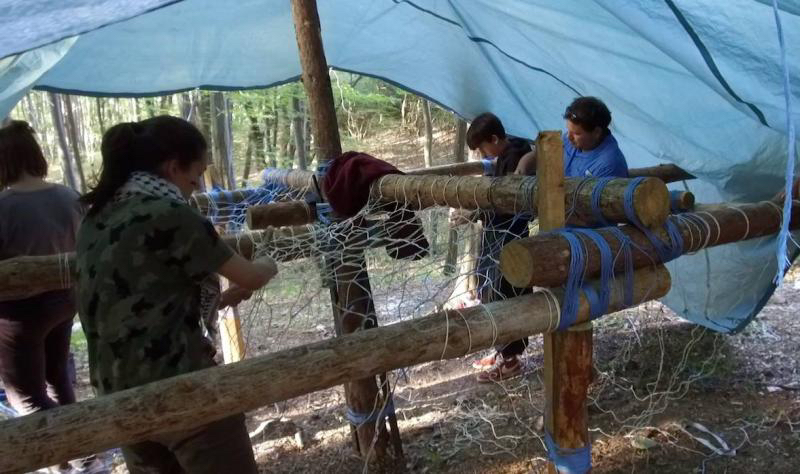 At the summer camp, they try to be self-supporting. The food is prepared in pans on a self-made fire. The shaliach teaches the group of young chanichim how to prepare a good fire. He explains the elements that are of importance. A common mistake is to use too much wood in the centre of the fire, which can cause too little oxygen.

The older group of chanichim had dug a hole in the earth with axes and shovels. Slowly they also made a big fire. At this fire, the tomato sauce was finally cooked, on the fire of the younger group the pasta was prepared.

The forest in which the summer camp takes place looked even more impressive during the sunset. While cooking, the madrichim (supervisors) consult with each other. A couple of chanichim were responsible for the food in the pans, while the others made a salad, played the guitar, or lay down on the lawn.

The chanichim and madrichim started dinner with singing out loud. It was dark and a flashlight lit the table. The chanichim did not stop telling stories. They were excited about our stay in the camp and told us about their lives. The participants were all very happy to be here and described how important Hashomer Hatzair is for them. 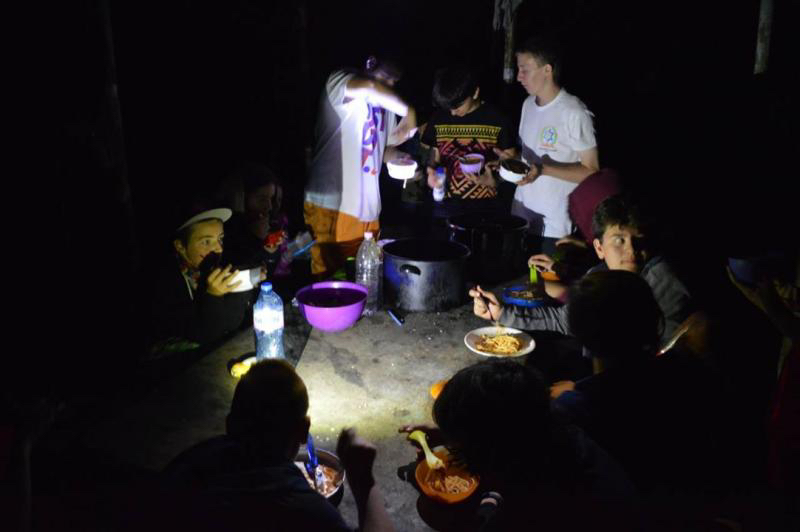 Today, we realized and became aware that this group of Bulgarian youth in this campsite in Malo Buchino's forests create something unique in the world.We take our notebooks wherever we go, we do not want to forget about all the special things we experience. The next couple of days we will stay at Hashomer Hatzair summer camp and we look forward to it!

Miki, the guy in the picture below, is madrich at Hashomer Hatzair. Today he was in charge of the hike. 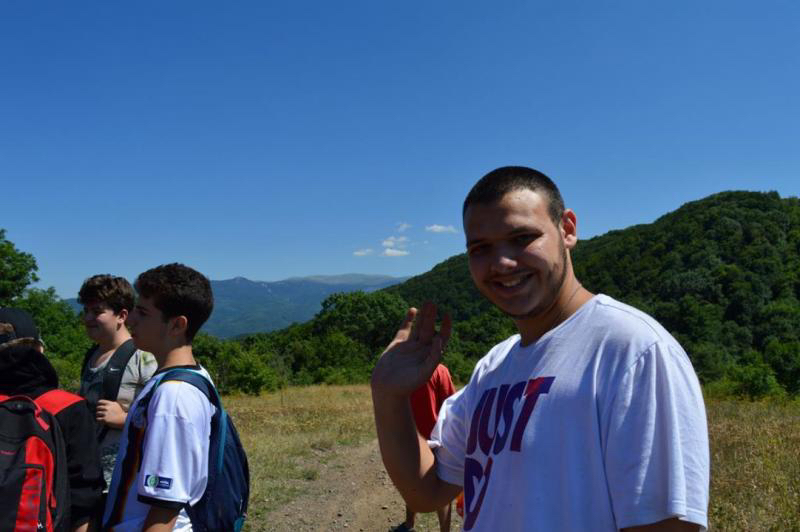 Before leaving, he informed us about the hike. He also gave instructions to the other madrichim. The smallest child walked in front of the group to determine the pace. The walk was very steep and we paused every 10 minutes to drink water. Miki checked all the time whether the group was complete. We felt fatigue in our leg muscles while climbing the mountain. We were impressed with the way Miki organized the hike. He was surprised when we gave him this compliment.

Once on the top (called Blagoto) of the more than 1100 meter high mountain Lulin, we are dazzled by the sunlight. After walking in the shades of thin tall trees, this was very refreshing. Once the group is complete, Miki tells us where we are. Then the group breaks up and there are activities per age group. 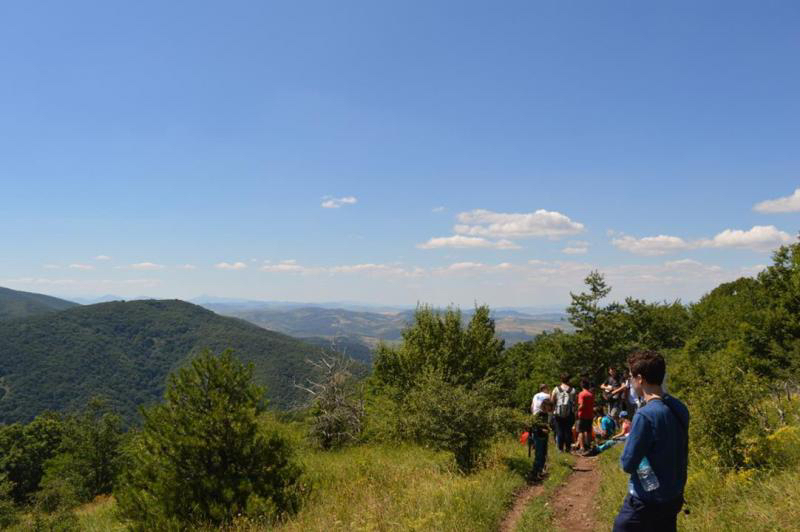 We join the middle age group. It is a meaningful activity. It was about discovering what makes us angry, and about the priorities in our lives. 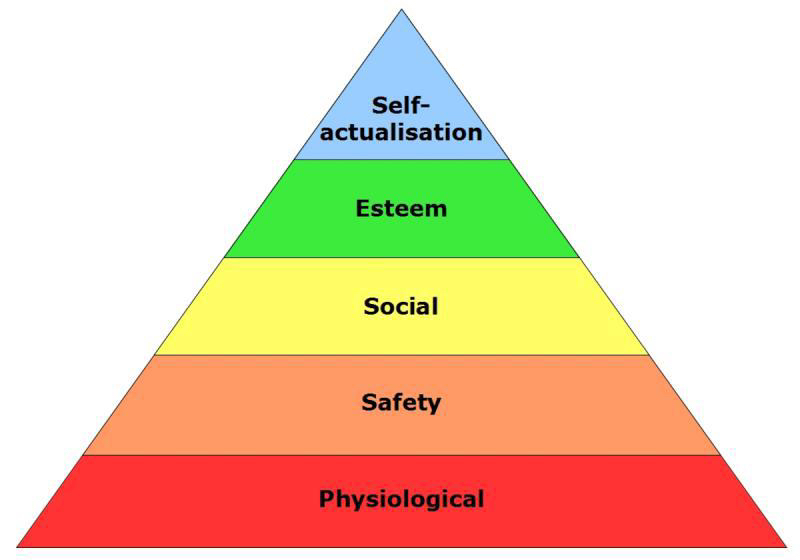 The activity is part of the theme of the summer camp: Maslow's pyramid. It is interesting how this theme fits well with the goals of Hashomer Hatzair Bulgaria, on the one hand, the chanichim learn how to tie knots, cook, and how to make a bonfire, on the other hand, they talk about happiness, time management and self-development.

After a five-hour hike, we returned to the campsite and there was time to relax, in the hammock, on the lawn and in the homemade beds. Also, a lot of guitar is played (Wonderwall and Hotel California) while the crickets are chirping in the background.

The table with benches and a simple roof is the only part of the campsite which was already there. This is where they cook and eat together. We are writing this blog on that table. 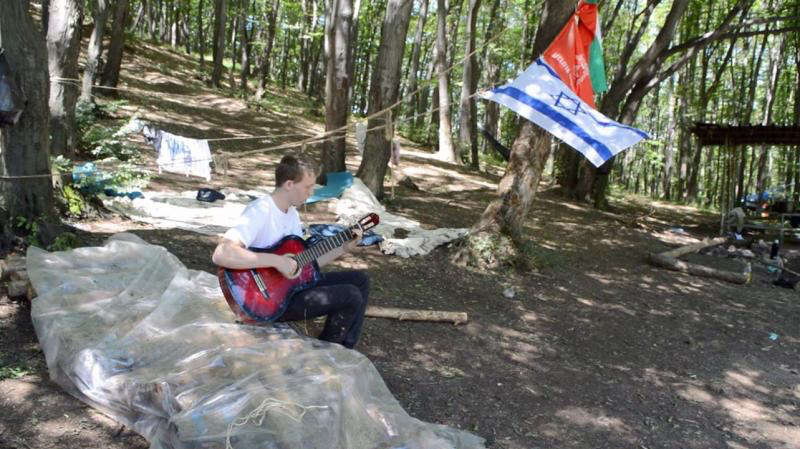 This morning we talked to Gal about responsibilities within Hashomer Hatzair. He is proud that the chanichim learned to deal with important tasks at the summer camp from a young age. The kids enjoy it and according to Gal, it is a great way for their personal growth. Every couple of years, the shaliach will be replaced and this is his last summer camp. His wife and son came to visit today. Very proud he walks around with his child on his arm.

The bonfire is the centre of the campsite where a lot of time is spent. Lit from the late afternoon till seven o'clock in the morning. Always two Chanichim are responsible for guarding the bonfire. There are always more chanichim around it. People start telling us enthusiastically about their lives in Sofia and stories about Hashomer Hatzair's camps. All chanichim are looking forward to the Mifkad-esh tomorrow, the traditional ending ceremony of the summer camp.

The remains of sunflower seeds can be found around the bonfire.

In the morning, when the chanichim wake up, they sit around the bonfire They put water on the fire, which ends the night and the day starts. Sammy, the leader of the camp gives a speech attempting to instil enthusiasm and determination for the work that has to be done and he wishes everyone a good day. Before breakfast, it was time for jumping jacks, knee lifts and a self-made obstacle course. 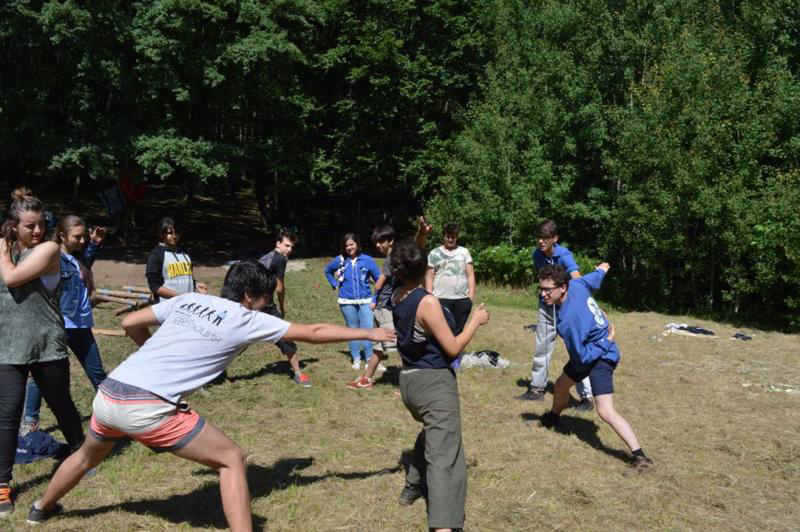 We prepared an activity for the group of oldest chanichim. We would like to get to know the children better and vice versa. The purpose of the activity was to learn from one another. By pretending to be cowboys and ninjas, we learned who was who. We played a game where the chanichim discovered similarities and differences between Hashomer Hatzair and Habonim-Dror. This is the youth movement in the Netherlands in which we are active. In addition, together with the chanichim, we made a video describing what Hashomer Hatzair means for them. After the activity, we continued to talk to each other for a long time and we felt that we had really gotten to know each other.

In the afternoon, everyone started working in groups to prepare a fire script. Jute bags were cut and threaded to form letters, these were attached to steel for the construction. Four people started to cook, others were writing speeches to read during the ceremony, everyone was doing a good job and cheerfully performed his task. We were all longing for the evening. 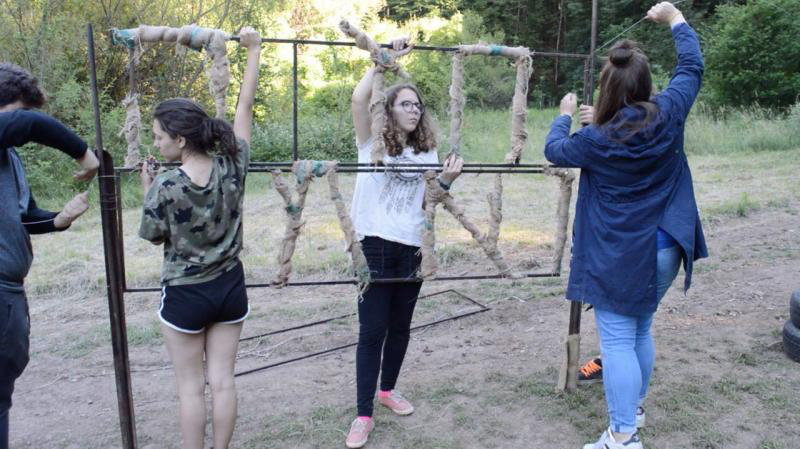 This evening, Presi was responsible for the rice. The pan looked like a witch kettle with the evaporating water. Occasionally she stirred in the pan. We started talking and she told us why this is her favourite place in Bulgaria. The teamwork, being together here at the summer camp, is the best. In Sofia, people do not know anything about the people around you. Who they are, and what is important to them.

After that, a night game was organized in which the disappearance of a chanich was staged. The chanichim knew it was staged, but they were excited and a little bit frightened to see what would happen next. They started looking for Ben along with two madrichim. The other madrichim were hiding along a dark forest path and between ruins of houses and they scared the children. The end was the moment the chanichim had to walk into the courtyard of a lurid church, where they met Ben and he revealed that he had not really disappeared. The children were very happy and surprised that this was organized for them.

We are grateful to Hashomer Hatzair for being part of this intimate summer camp and for their hospitable welcome!

The final ceremony started with speeches about the summer camp, the group and what they have reached. Everyone was touched. The fire of the firescript was lit with a torch and Hatikvah, the national anthem of Israel was sung. The group began to sing other songs of their movement. Shoulder to shoulder in a circle and they were dancing, singing and jumping. We were very impressed with the ceremony, even though the songs were in Bulgarian. The group was emotional. It was a memorable end of the summer camp and we will not forget the past three days. We do not have much time to settle the experience, tomorrow we will go to Moscow!

This weekend we became acquainted with the Jewish community of Moscow. Besides that, we visited the highlights of the city!

Every summer camp of Adain Lo, a Jewish community organization from Saint-Petersburg, the parents are invited to visit for a day. It happened to be today. Tomorrow and the day after we will get to know the summer camp and its participant better. We are looking forward to that with you!

In this video, we are explaining what Adain Lo stands for. Also, you'll see what everybody is doing from morning till night!

We visited the Gulf of Finland on our last day with Adain Lo and asked the chanichim what they like the most about their summer camp.

In Saint Petersburg we visited the Grand Choral Synagogue and the Hermitage, we met up with Jewish students and we made a nightly boat tour through the canals.

Ukraine: Shabbat with Hillel in Kiev

This Shabbat we stayed in Kiev, where we participated in the activities of the Jewish student organisation Hillel. The students showed us around the city, including the Maidan square, the market and a synagogue.

A special part of our trip was the visit to Anatevka, a refugee community for Jewish families from the conflict area in Eastern Ukraine. The Rabbi of the Brodsky Synagogue showed us around the place, which was completely empty a few years ago.